This just in from Waltham Abbey Folk Club…
Important update information.
Please note that 30th Oct will be our last meeting at the Royal British Legion Hall.  From November 6th we will be welcome at The Angel public house , Sun Street , Waltham Abbey , Essex EN9 3DP.
Folk will start to gather at 7pm, singaround starts at 7-30 until 10-30.
We will continue to have one guest evening a month with singaround money going towards the fee.
The £1 per head donation that went to the legion every week will now be donated to the charity jar at the pub.

This just in from Bedford Folk Dance Club: 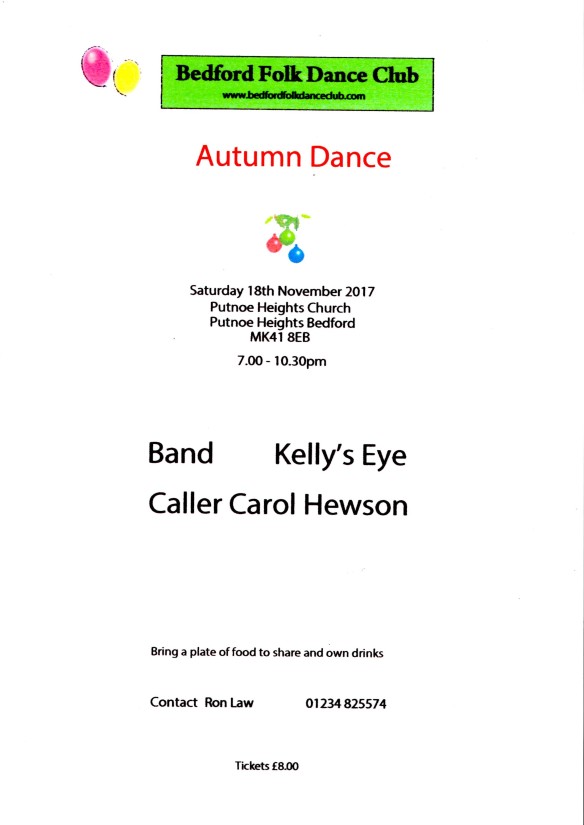 This just in from the White Horse Folk Club…
With immediate effect we are having to change venue to
The Hertford Club
Lombard House
Bull Plain
Hertford
SG14 1DT
…and as we will no longer meet in The White Horse I’m changing name to Four Rivers Folk Club (Hertford sits on the convergence of of The Beane, Lea, Rib and Mimram)
Until end of year we will be meeting there on 2nd and 4th Tuesday in the bar but in 2018 we will be changing evening to the  2nd and 4th Wednesday and have a private room upstairs.
More explanation here:
Hi Guys,
Due to the uncertainty of the viability of the White Horse as  a venue for the folk Club due to it remaining closed caused by no beer deliveries. There are many issues outstanding between Stefan (the licensee) and Fullers who appear to charge their resident landlords £160 for a barrel of London Pride but only charge non-tied landlords £115 or thereabouts. Stefan has taken no money out of the enterprise for the last 11 months. Seemingly Fullers are looking for another landlord.
With all this going on and to ensure that we continue to have a folk club in Hertford I have approached The Hertford Club and the following has been agreed to.
1. We can continue in the Hertford Club bar on a tuesday evening until end of this year.
2. From January 2018 we will run the folk club on the 2nd and 4th Wednesday monthly. This is because they a a decades long commitment  to the Chess Club on Tuesdays and this is ongoing.
3. I will transfer the amplified open mic from the 2nd Wednesday  to the 3rd Wednesday of the month
4. We will have the room upstairs in the  Club at our disposal so we will be free of bar noise and be able to accommodate larger audiences.
5. They will charge me their standard fee for the room £25 per night but I can have my open mic night there if I want to without incurring an extra charge
6. If we have bigger acts that require a pa we can do this in this room.
Some notes:-
1. As we’re not using the White Horse I propose changing the name of the club to the “Four River’s Folk Club”, I didn’t think “The Hertford Club Folk Club”sounded good and “The Lombard House Folk Club” sounded too posh!
2. As I have to pay for the room now I am suggesting a £2 fee for audience and keeping it free for players as I don’t believe in the “pay to play” policy of some clubs.
3. Roger and Emma have helped out tremendously in taking over on nights but Roger isn’t always available and he and Emma are regulars at the Wednesdays in the Herald in Harlow so I’d like to ask Mike and John to consider assisting on a regular or ad hoc basis so I can have holidays etc.
Let me know how you see all this and please make suggestions.
To refresh from next Tuesday onwards we will be at the Hertford Club can you let as many people know as possible.
Cheers
Pat

Cambridge-based Emily Mae Winters is on tour, and has a gig coming up in December at The Junction, Cambridge.

Keep up to date with all the latest news from Unicorn Magazine including new issue releases:
SUBSCRIBE